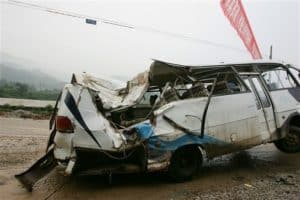 A minibus is seen after it was hit by a rock in Wanzhou District of Chongqing, in western China, Thursday, June 21, 2007. A rock fell on the bus, killing seven people and leaving 12 injured. Continuous rainfall caused the rock to slip from a mountain and hit the rear of the bus, according to local media. (AP Photo/EyePress) ** CHINA OUT **