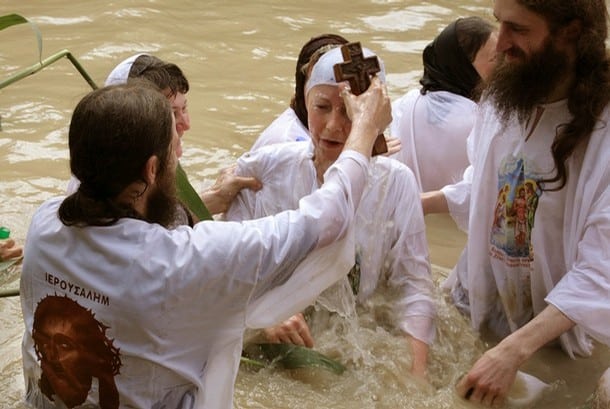 Chrisitian orthodox priests baptize a pilgrim in the waters of the Jordan River during a ritual baptism 03 April 2007 at the baptismal site of Kasser el Yahud. Around 3,000 Orthodox Christian pilgrims took a ritual dip in the Jordan River near the West Bank city of Jericho part of their Easter pilgrimage to the Holy Land. According to the gospels Jesus Christ was baptized in the water of the Jordan River by John the Baptist. Christian believers around the world mark the Holy Week of Easter in celebration of the crucifixion and resurrection of Jesus Christ. AFP PHOTO/GALI TIBBON (Photo credit should read GALI TIBBON/AFP/Getty Images)