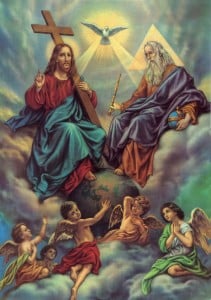 We are sure there are more songs from mallu movies that are very good devotional ones. We will be searching for them and will soon be adding them to this collection of Malyalam Christian Film songs at TBTG. But right now we have only these 5 for a start – Anupama Sneha Chaitanyame, Devadoothar Paadi Devadoothar Paadi, Nee En Sarga Saundariyame, Vathil Thurakku Nee Kaalame and Vishwam Kaakunna Nathaa.

If you come across any other christian devotional song from any malayalam movie, do let us know by giving your comment under this article. We will try our best to include them too here in future.

This entry is filed under Songs. You can follow any responses to this entry through the RSS 2.0 feed. You can leave a response, or trackback from your own site.
23 Responses to “Old Malayalam Christian Film Songs”
1

There is nothing more to say thanks for such like songs.

JESUS keep u eva BLESSED in HIM Georgy.. Remain blessed & happy in our ALL MIGHTY SAVIOUR, the ONE & ONLY LIVING GOD,Our FATHER In HEAVEN,Thro HIS ONE and ONLY BELOVED & DIVINE SON,JESUS CHRIST,OUR LORD & SAVIOUR,thro whom we have ETERNAL LIFE. In JESUS name.. Amen..

HOW WE CAN HEAR ALL SONGS ONE BY ONE CONTINUOUSLY

All good songs.Could you please upload a christian devotional song ” Mazha villin ezhu nirangalku varnum koduthavan Ezhu nathan.” in this site so that I can download it.

songs are beautiful and i want to download these songs but there is no facility for that.it’s my request that please enable the option for downloading.

Its a very good site God bless u to keep up good work. Thank u so much

all songs are vry good.
pls sent me also.

this is a good song

I need a very old devotional song “Thiruhrudayapookkalal thirumunpil nilkkunu” can you pls upload that one? thanks for the 5 songs, they are unforgettable.