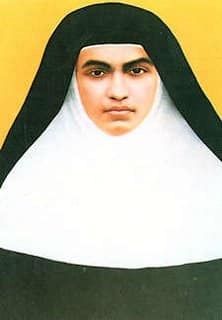 Today we celebrate the feast of Saint Alphonsa.Â

Sister Alphonsa is popularly known as a person who loved and invited loving suffering. She is called the â€œLittle Flowerâ€ (St. Therese of Child Jesus) of India. Both of these claims draw our attention to the fundamental reality and truth of Jesus Christ as the only Son of God and the unique Savior of the whole creation. She was a Franciscan Clarist nun. Her life was confined within the four walls of the FCC Convent at Bharananganam.

Annakutty was the childhood name of Alphonsa. Roughly translated it would mean â€˜little Annâ€™. It is a typical christening name popular among the Christians of Kerala. Although the immediate attention is now focused on the name Alphonsa, reflection on the name Annakutty reveals not only her childhood goodness, virtues and trials, but also an often unsung story and history of the family values, faith practices and ecclesial foundations of the Christians in Kerala. Without any exaggeration, one can say that Alphonsaâ€™s real foundation was laid in her childhood as Annakutty, in her Christian family upbringing.

Annakutty was born on August 19, 1910. It was a premature birth, taking place in the 8th month of the pregnancy. This was the result of a diabolical shock her mother, Mary Muttathupadathu, received from the coiling of a rat snake around her neck in her sleep. Her mother died three months after birth and on her death-bed she entrusted Annakutty to the care of her own sister Annamma Muricken. With her aunt, Annakutty painfully and joyfully tried to overcome the inexplicable loss of her mother and motherly love.

Annakuttyâ€™s father unwillingly agreed to placing the child with her newly found â€˜motherâ€™ with the sole motive of promoting an ideal upbringing which would make Annakutty more capable as a future house wife. Annamma Muricken educated her sternly. The family played a key role in her faith formation and love for Christ, especially through the prevalent practices of regular evening prayers, observance of weekly fasting and participation in the Eucharistic celebration.

Fr. Romlus rightly emphasizes this role the family played in the life of Alphonsa in nurturing and deepening her Christian faith. However the most important fact is that Annakutty developed a personal devotion and love for Christ. This is the fruit of her genuine faith formation. It is also the first visible sign that faith was a lived experience in the childhood of Annakutty. In other words, Jesus Christ began to become a concrete personal relational reality for her. It is because of this relational realization of Godâ€™s love and knowledge of Jesus Christ that Annakutty began to yearn for sanctity.

The desire for sanctity was for Alphonsa a solid and concrete response to the invitation of Christ. The surprising depth of spiritual understanding possessed by Alphonsa in her childhood teaches us all the most profound lesson on the Christian life. Spirituality and sanctity is not a mere object to yearn for but comes as a result of a personal experience with Jesus Christ in the Church and in the Sacraments. A striking narration related to her first confession as a little child throws light on this fact. She notes, â€œI loved God more ardently. I took great care to avoid all faults. I had nothing special to mention in my First Confession. I zealously aspired to become a saint. I felt that desire while I was reading the biography of St. Therese of Lisieux.â€

Later, the decisive Christian family upbringing of Annakutty paved the way to the fruit borne in her life as a professed Clarist nun at Bharananganam. It is important to remember that because of the unique minority status of the Christian community in India, and because of the apostolically rich traditional background of the Church in Kerala, any mention of Alphonsa will always have to be done in reference to the unique ecclesial nature of the Catholic Church in India. That is the tri-ritual communion and the Christian reality of India which is astoundingly ecumenical because of the presence of all the major tributaries of non-Catholic traditions.

Hundreds of thousands of Catholics in Malabar and other parts of South India have faith in Sister Alphonsa and invoke her aid, for they are convinced that she is a person of uncommon holinessâ€¦What a power would she not wield over the minds and hearts of the Catholics of our country where her cause to be taken up. At a turning point in its history, when the Church has to face so many difficulties and trials, struggles and dangers different in character and different in scope from those which assailed her in the past, may we not hope that through her intercession the Church will overcome all obstacles and grow in strength and vigor? It is fitting that such a beautiful soul should have sprung up in the earliest and most prosperous home of Christianity in our country.

6 thoughts on “Life of Saint Alphonsa”