Jesus And The Canaanite Woman 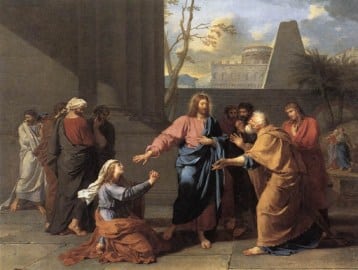 Today, we often hear the expression “faith has been lost”, and the same people who ask our communities the baptism of their children or the catechesis for their infants or the sacrament of marriage, say it. These words depict the world in a negative way while trying to convince us bygone times were better and that we are now at the end of a stage where there is nothing left for us to say or to do.

This passage of the Gospel draws the attention to that Canaanite mother that demands grace for her daughter by recognizing in Jesus the Son of David: “Lord, Son of David, have pity on me! My daughter is tormented by a demon” (Mt 15:22). The Master is surprised: “Woman, how great is your faith!” and He can do nothing but to act in favour of those persons: “Let it be as you wish” (Mt 15:28), although this does not seem to fall within his schedule. However, God’s grace is manifested in human realities.

This entry is filed under Bible. You can follow any responses to this entry through the RSS 2.0 feed. You can leave a response, or trackback from your own site.
Your Thoughts Are Welcome | Leave a Reply
Prev/Next Posts
« Bible Software In Modern Life | Home | Video : Why We Remember 9/11 »
Subscribe For Free
Pages
Top Devotional Songs
Today's Top 10
Most Discussed Posts