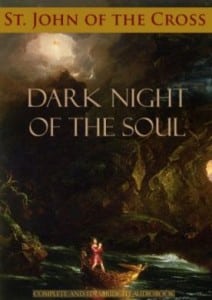 Dark Night of The Soul by St. John of The Cross

This is Â the sequel toÂ Ascent of Mount CarmelÂ by St. John of The Cross. St. JohnÂ continues to describe the dark night in this sequel. Download theÂ Dark Night of The Soul PDF for free from the above download link. The PDF has 96 pages.

Preface to Dark Night of The Soul

Somewhat reluctantly, out of respect for a venerable tradition, we publish theÂ Dark Night as a separate treatise, though in reality it is a continuation of the AscentÂ of Mount Carmel and fulfils the undertakings given in it. And the second night, or purification, pertains to those who are alreadyÂ proficient, occurring at the time when God desires to bring them to the stateÂ of union with God. And this latter night is a more obscure and dark andÂ terrible purgation.

In his three earlier books he has written of the Active Night, of Sense and ofÂ Spirit; he now proposes to deal with the Passive Night, in the same order. He hasÂ already taught us how we are to deny and purify ourselves with the ordinary help ofÂ grace, in order to prepare our senses and faculties for union with God through love.Â He now proceeds to explain, with an arresting freshness, how these same sensesÂ and faculties are purged and purified by God with a view to the same endâ€”that ofÂ union.

The combined description of the two nights completes the presentation ofÂ active and passive purgation, to which the Saint limits himself in these treatises,Â although the subject of the stanzas which he is glossing is a much wider one,Â comprising the whole of the mystical life and ending only with the Divine embracesÂ of the soul transformed in God through love.

TheÂ Active Night has left the senses and faculties well prepared, though not completelyÂ prepared, for the reception of Divine influences and illuminations in greaterÂ abundance than before. The Saint here postulates a principle of dogmatic theologyâ€”that by himself, and with the ordinary aid of grace, man cannot attain to thatÂ degree of purgation which is essential to his transformation in God. He needsÂ Divine aid more abundantly.

‘However greatly the soul itself labours,’ writes theÂ Saint, ‘it cannot actively purify itself so as to be in the least degree prepared for theÂ Divine union of perfection of love, if God takes not its hand and purges it not in thatÂ dark fire.’

2 thoughts on “Ebook : Dark Night of The Soul”