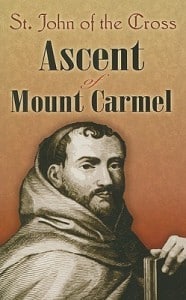 Ascent of Mount Carmel by St. John of The Cross

Read the above PDF which is one of the best works ofÂ Â St. John of The Cross, confessor and doctor of the Church. The book is titled ‘Ascent of Mount Carmel’. This was the first of the Saint’s treatises to be written; it was begun at El Calvario, and, after various intervals, was completed at Granada.

The treatise presents a remarkable outline of Christian perfection from the point at which the soul first seeks to rise from the earth and soar upward towards union with God. It is a work which shows every sign of careful planning and great attention to detail, as an ascetic treatise it is noteworthy for its detailed psychological analysis; as a contribution to mystical theology, for the skill with which it treats the most complicated and delicate questions concerning the Mystic Way.

In order to reach the Union of Light, the soul must pass through the Dark Night — that is to say, through a series of purifications, during which it is walking, as it were, through a tunnel of impenetrable obscurity and from which it emerges to bask in the sunshine of grace and to enjoy the Divine intimacy.

Through this obscurity the thread which guides the soul is that of ’emptiness’ or ‘negation.’ Only by voiding ourselves of all that is not God can we attain to the possession of God, for two contraries cannot co-exist in one individual, and creature-love is darkness, while God is light, so that from any human heart one of the two cannot fail to drive out the other.

Now the soul, according to the Saint’s psychology, is made up of interior and exterior senses and of the faculties. All these must be free from creature impurities inÂ order to be prepared for Divine union. The necessary self-emptying may be accomplished in two ways: by our own efforts, with the habitual aid of grace, and by the action of God exclusively, in which the individual has no part whatsoever.

Following this order, the Ascent is divided into two parts, which deal respectively with the ‘Active’ night and the ‘Passive.’ Each of these parts consists of several books. Since the soul must be purified in its entirety, the Active Night is logically divided into the Night of Sense and the Night of the Spirit; a similar division is observed in treating of the Passive Night. One book is devoted to the Active Night of Sense; two are needed for the Active Night of the Spirit. Unhappily, however, the treatise was never finished; not only was its author unable to take us out of the night into the day, as he certainly intended to do, but he has not even space to describe the Passive Night in all the fullness of its symbolism.