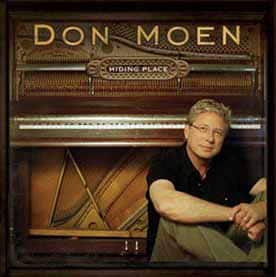 Who is Don Moen?

If you ask Don Moen why God put him on this planet, he’ll tell you, “To be an architect who designs products and events that help people experience God’s presence in a new and fresh way.” And in more than three decades of ministry, he’s had lots of opportunity to fulfill that purpose.

Don grew up in Minnesota before moving to Tulsa, Oklahoma, to attend Oral Roberts University. There, his musical gifts caught the eye of Terry Law, who asked Don to join his worship team, Living Sound, which ministered in communist countries throughout Eastern Europe and the former Soviet Union. For 10 years, Don was responsible for much of the group’s arrangements and musical productions, and saw first-hand the power of praise and worship to open closed doors and hearts, and lead enslaved people into the presence of God.

In 1984, Integrity Music asked him to lead worship on one of the first Hosanna! Music albums, Give Thanks. The project became one of Integrity’s most popular recordings ever and a benchmark for the genre, achieving gold certification status and now nearing platinum certification.

Don eventually joined the staff of Integrity, and served as President of Integrity Music and executive vice president/creative director for Integrity Media. In these roles, he spoke into the production of hundreds of products including all of the CDs and worship resources produced by Integrity Label Group. As an artist in his own right, Don has sold over five million units.

His discography reflects his passion to create resources for the church that lead people into an honest and intimate relationship with the Lord. In 2002, his peers recognized that lifelong commitment and presented him with the Ray DeVries Church Ministry Award.

Don has also received a Dove Award for his work on the musical “God With Us” and has received multiple Dove Award nominations for his songs, CDs and choral resources.

In addition to his writing and recording, Don makes time to tour domestically and abroad and has performed with artists such as Chris Tomlin, Twila Paris, Sara Groves and Paul Baloche to name a few. He also has served as worship leader for past National Day of Prayer events and as a music industry spokesperson, having been featured on Fox News, NPR and in USA Today.

Don is as popular overseas as he is at home in the U.S. His travels for concerts and seminars have taken him to Ghana, South Africa, Singapore, the Philippines, South Korea, Brazil, Canada, Australia, Great Britain, Hong Kong, Malaysia, Indonesia, Japan, Guatemala, Honduras, and elsewhere.

Don resides in Mobile, Alabama, with his wife Laura and their five children. And, despite his many creative pursuits, family is his first priority. The man who leads thousands in worship is just as an ordinary husband and dad who loves serving as a short order cook at home and cheering at his children’s ball games.

Having led worship on 6 continents and selling over 5 million units around the globe, Don Moen has been witness to the global worship explosion happening amongst the Church today. His songs have continued to leave a lasting impact on churches and Christians all over the world, putting him on the forefront of this massive growth of worship.

Driven by a renewed desire to lead others to experience the presence of God, this talented songwriter seeks once again to take worshippers on a journey towards a deeper level of faith with our Heavenly Father. Hiding Place creates an atmosphere of true worship, allowing us to praise Him through song and feel His awesome power!

Click on any song in the list to go to its Music page. Come, Lets praise Our Lord together with Don Moen and his team.

This entry is filed under News. You can follow any responses to this entry through the RSS 2.0 feed. You can leave a response, or trackback from your own site.
42 Responses to “Don Moen – Latest Album ‘Hiding Place’”
1

if i would ask for anything don it would be for God to give me a double portion of your talent in worship.you truly bless me thanku so much

God bless you all for wonderful ministry!

I am Fram Camaeroon and I am of age 21 but foe the past ten years I have never admired a gospel musician Like Don Moen. He is my Idoil for gospel worship,
I could not just hold myself last year when I listened to his latest album ‘ be still’. From then I get evry morning and listen to the album . In school I listesn to it on the phone . Papa!!!!!!! May god give U the grace to impart more lives through the continents in the name of Jesus. Please if i may ask from where do U get your inspiration, because I am also intending to go into music.

your music encourages me to go on even when i feel there is no way..God bless..

your doned good job in the earth

You are a true inspiration to my soul. May God grant you the strength to keep on living for him and reaching out for more people to turn back to him.
Blessings

ever since i first heard his songs,I have remained a Don moen addict.

If i near to u!i’d hug u because by ur song “Give thanks”shrinks me in holyspirit.Dr.Don moen.

i really thank u don. whenever i listern to your songs i always feel something new in me. you a real don. may God bless u

No other songs help me meditate as much as the songs of Don Moen.Most times,i say to myself,how do these wonderful songs come into him? He’s really gifted.

Don Moen, You are simply an angel sent from heaven to saturate the earth with the presence and glory of God like the water cover the sea. You have affected so many lives beyong what you can ever imagine. You are a blessing! More Grace,in Jesus’ Name.

Don you have been an instrument in God’s hand for the world. keep up the good work of teaching us and leading us to worship the Father in spirit and truth. You are a blessing i tell you

Don, I just love all of your music , praise & worship ! Keep the Lord’s word going & the songs are just execellent!

The peace of mind that you while hearing these songs are inexpressable.

Don, your songs inspires my heart all the time. In fact i do not buy any other tapes since i come across your tapes, this had been extended to my children. May the Lord continue to use you in bringing people closer to Him.

may God bless you in his choicest way because all song are just wow before God amen.

No man’s song have ever blessed my soul like yours,especialy thank you Lord.God bless you the more

I come from Kenya and started listening to Don songs in late nities while in High School to date. These songs bless my heart.I love songs by Don because they are Scripture based; hence will stand the test of time.

hello uncle,
this is hadassa n iam big fan of ur voice.
I love your songs very much.

God bless you so much for what you have done for the lot that listen to your music. Many souls have been touch through your music. I pray that the Lord continue to bless you and give the grace to do more.

Don,your songs are such a blessing to me, every time when i listen to your songs it brings me another step closer to God. thankyou for the wonderful work and may the LORD continue to bless, and inspire you with new anointed songs to save many lifes. thankyou..

hi don. you are really of great impact upon my life. am so inspired by the ministry God has entrusted you with. Among my favorite albums is ‘I WILL SING’. When ever i start listening to that album i feel the Presence of God feeling the whole place. God richly bless you.

I bought your CD from my Church Of Assumption in Malaysia
It is so beautiful and when my family listens to your songs, my lovely Labrador listens and keeps silent too.

Thank You, Lord for giving us such a beautiful person in Doen

I listen to ‘ God will make a Way’ every night before retiring to bed
GOD Bless You and Your Ministry and Your Family too.

i write from cameroon. i woke up this morning with tears pouring down my eyes with no hope left. then my brother played a don moen cd, n i cried even more but this time not tears of sorrow but tears of joy!!! joy because Don reminds us every time that there is a friend closer than a brother and that friend is Jesus!!

i am from cameroon , man of GOD keep on GOD bless you bye.

What a great man of God through whom God has touch my life several times-mostly when am down spiritually in fact @ all times. the first and best gospel musician i have ever loved. God bless and be with him, empower him and his ministry the more. Amen.

Looking forward for another new release from the ministry. God bless and be with you all.

I am always blessed whenever I listen to your tracks. You are indeed a blessing to the world. God bless you and increase His anointing in your life and ministry.

Don, you songs are truly amazing. They have really helped me to grow in my spiritual life. God bless you.

DOEN, all i can say is that you are such a wonderful gift to mankind from GOD. Our generation is so blessed to have you. All your songs are inspiring. my best song is ” painter of the sky” whenever i listen to it, i shed tears of joy in my heart, it has really helped me to draw closer to GOD’s presence daily.
May GOD continue to out pour his overflowing anointing upon your life and ministry.

i am in with don moen’s music.he’s tracks has been a blesing to me and ma family

I am an asian, I adored Don’s music since its lift me up! I felt God is working with me everytime i listened to the music.Thank u for inspiring millions of people arround the world! you’re gods gift to us!

This is great. God’s purpose through Don Moen has come true in my life,is still coming true,and will forever be true.

Nice post which the music has lots of inspirational message which give the listeners to think. This message make praising to the lord. Thanks a lot for posting.

your songs touched my life

look people should be careful on how they make creticism or else they will face the anger of God. one thing i noticed with people is that when someone becomes distinguish, outstanding and successfull in something eunique or spacial he gets criticised. you criticise world top traditional ruller, top politician, circuler musicians yet you are not satisfy now people have started criticising religious leader and gospel singers even wroungly. how can u call don moen, t.d jakes, t.b joshua eubet angel idahusa and lot more of them as cultist illumitaties ? my prayer is dat may the god lord have mercy on you all. shaloom pls.

Don Moen is a man after God’s heart.