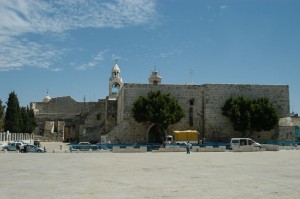 Church of Nativity in Bethlehem is a major Christian holy site, as it marks the traditional place of Christ’s birth. It is also one of the oldest surviving Christian churches. Click Here for more pics.

The birth of Jesus is narrated in the Gospels of Matthew and Luke. Matthew gives the impression that Mary and Joseph were from Bethlehem and later moved to Nazareth because of Herod’s decree, while Luke indicates that Mary and Joseph were from Nazareth, and Jesus was born in Bethlehem while they were in town for a special census. Scholars tend to see these two stories as irreconcilable and believe Matthew to be more reliable because of historical problems with Luke’s version.

But both accounts agree that Jesus was born in Bethlehem and raised in Nazareth. According to Luke 2:7 (in the traditional translation), Mary “laid him in a manger because there was no room for them in the inn.” But the Greek can also be rendered, “she laid him in a manger because they had no space in the room” — we should perhaps imagine Jesus being born in a quiet back room of an overflowing one-room house.

The gospel accounts don’t mention a cave, but less than a century later, both Justin Martyr and the Protoevangelium of James say Jesus was born in a cave. This is reasonable, as many houses in the area are still built in front of a cave. The cave part would have been used for stabling and storage – thus the manger.

The Door of Humility, a small rectangular entrance to the church, was created in Ottoman times to prevent carts being driven in by looters, and to force even the most important visitor to dismount from his horse as he entered the holy place. The doorway was reduced from an earlier Crusader doorway, the pointed arch of which can still be seen above the current door. The outline of the Justinian square entrance can also be seen above the door.

The wide nave survives intact from Justinian’s time, although the roof is 15th-century with 19th-century restorations. Thirty of the nave’s 44 columns carry Crusader paintings of saints and the Virgin and Child, although age and lighting conditions make them hard to see. The columns are of pink, polished limestone, most of them reused from the original 4th-century Constantinian basilica.

Fragments of high-quality wall mosaics dating from the 1160s decorate both sides of the nave. Each side once had three registers, of which we know the details because of a description made in 1628. The lowest depicted the ancestors of Jesus; the middle contained the decrees of provincial and ecumenical councils; and the top has a series of angels between the windows. The name of the artist, Basilius Pictor, appears at the foot of the third angel from the right on the north wall.

Trap doors in the present floor reveal sections of floor mosaics surviving from the original basilica. The mosaics feature complex geometric designs with birds, flowers and vine patterns, making a rich and elaborate carpet for Constantine’s church. Similar doors in the north transept protect another 4th-century mosaic that shows the Constantinian apse was octagonal; these are sometimes opened on request.

An octagonal baptismal font in the south aisle dates from the 6th-century church of Justinian; it originally stood near the high altar. The inscription reads, “For remembrance, rest and remission of sins of those whose names the Lord knows.” Archaeologists have discovered an octagonal bed of exactly the same dimensions over a cistern near the altar which provided the required water. After the font was moved in the Crusader renovation, it became the focus of various colorful legends: it was the well into which the star of the Magi fell; the well where the Magi watered their horses; or the well to which David’s three heroes came.

The main altar at the east end and the one on the south (Altar of the Circumcision) are the property of the Greek Orthodox Church. The main altar includes an Orthodox iconostasis, which is crowned with gilded angels, icons, gilded chandeliers and lamps. On the north side of the high altar is the Armenian Altar of the Three Kings, dedicated to the Magi who tied up their horses nearby, and in the north apse is an Armenian altar dedicated to the Virgin Mary.

The Grotto of the Nativity, a rectangular cavern beneath the church, is the Church of the Nativity’s focal point. Entered by a flight of steps by the church altar, this is the cave that has been honored as the site of Christ’s birth since at least the 2nd century.

A silver star in the floor marks the very spot where Christ is believed to have been born. The star’s Latin inscription reads, “Here of the Virgin Mary Jesus Christ was born — 1717.” The floor is paved in marble, and 15 lamps hang above the star (six belong to the Greeks, five to the Armenians and four to the Latins).

All other furnishings date from after the fire of 1869, except for the bronze gates at the north and south entrances to the Grotto, which are from Justinian’s 6th-century church.

Steps away from the birthplace shrine is the Chapel of the Manger, owned by the Roman Catholics. Fragments of 12th-century wall mosaics and capitals around the manger survive. Back in the upper church, a door in the north apse leads to the Catholic Church of St. Catherine.

This entry is filed under Holy Places. You can follow any responses to this entry through the RSS 2.0 feed. You can leave a response, or trackback from your own site.
One Response to “Church of Nativity Bethlehem”
1

I am so glad there are sites like yours!