Catholics and The Bible 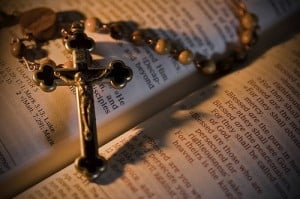 The Bible and the Catholic Church

Hear the following talk from Apologetics about Catholics and The Bible.

Catholics and The Bible

We are presenting the same things in written format down here. But we suggest you to hear the above audio of the talk from Apologetics.

A. Literal Interpretation…YES!
~CCC #116
~Literal interpretation of scripture takes into account the meaning that the author intended to convey.
Example: “It’s raining cats and dogs.”
Meaning: Its raining hard.

~ Literalist interpretation takes the exact meaning of the words without consideration of popular cultural meaning or the meaning that the author intended to convey.
Example: “It’s raining cats and dogs.”
Meaning: Cats and dogs are falling from the sky.

For more information see: “The Interpretation of the Bible in the Church”, Pontifcal Biblical Commission, Article I,F; 1993

A. The Catholic, literal, interpretation
~ Neither of these stories are intended to be a chronological account.
~ They are complimentary…NOT contradictory.
~ We don’t know the exact details nor timing of creation…it was not the human author’s intent to write a scientific treatise.

In the beginning, God created the heavens and the earth. The earth was without form and void…Genesis 1:1-2

A. The nine things that the Church teaches:
1. The creation of all things out of nothing by God at the beginning of time (including the creation of time).
2. The special creation of man.
3. The creation of woman from man.
4. All of humanity is descended from an original pair of human beings – i.e. Adam and Eve.
5. Adam and Eve were created in an original state of holiness, justice, and immortality.
6. A divine command was laid upon man to prove his obedience to God [do not eat from the tree…]
7. The transgression of that Divine Command at the instigation of Satan.
8. The loss of the state of holiness, justice, and immortality of our 1st parents [because of their disobedience, Adam and Eve were kicked out of Paradise].
9. The promise of a future Redeemer, a Savior [Genesis 3:15, the protoevangelium, the first “good news”]. Reference: Denzinger: #2123

By yielding to the tempter, Adam and Eve committed a personal sin, but this sin affected the human nature that they would then transmit in a fallen state. – CCC #404

B. Spiritual Sense (CCC #115-119)
1. Allegorical Sense-refers, ultimately, to Christ.
~ Crossing the Red Sea; with 1 Corinthians 10:1-2
~ Abraham & Isaac; with God’s sacrifice of His son, Christ.
2. Moral Sense-how we apply scripture in our daily walk with Christ.
~ 10 Commandments
3. Anagogical Sense-concerned with our ultimate destiny.
~ Judge not, lest ye be judged (Matthew 7:1)

We can view realities & events in terms of their eternal significance, leading us toward our true homeland: thus the Church on earth is a sign of the heavenly Jerusalem. – CCC #117

B. Providentissimus Deus, Pope Leo XIII, 1893
“It is absolutely wrong and forbidden either to narrow inspiration to certain parts only of Holy Scripture or to admit that the sacred writer has erred. For the system of those who, in order to rid themselves of these difficulties, do not hesitate to concede that divine inspiration regards the things of faith and morals, and nothing beyond…this system cannot be tolerated.”

“It follows that those who maintain that an error is possible in any genuine passage of the sacred writings either pervert the Catholic notion of inspiration or make God the author of such error.”

“…all the Fathers and Doctors [of the Church] agreed that the divine writings, as left by the [sacred authors], are free from all error, [and] they labored earnestly, with no less skill than reverence, to reconcile with each other those numerous passages which seem at variance.”

St. Augustine writing to St. Jerome: “On my own part I confess… that it is only to those books of Scripture which are now called canonical that I have learned to pay such honor and reverence as to believe most firmly that none of their writers has fallen into any error. And if in these books I meet anything which seems contrary to truth I shall not hesitate to conclude that the text is faulty or that the translator has not expressed the meaning of the passage, or that I myself do not understand.”

C. Divino Afflante Spiritu, Pope Pius XII, 1943
“…not merely because [the books of the canon] contain revelation without error, but because, having been written under the inspiration of the Holy Spirit, they have God for their author…When, subsequently, some Catholic writers, in spite of this solemn definition of Catholic doctrine, by which such divine authority is claimed for the ‘entire books with all their parts’ as to secure freedom from any error whatsoever, [when these Catholic writers] ventured to restrict the truth of Sacred Scripture solely to matters of faith and morals…Leo XIII…justly and rightly condemned these errors.” – DAS #1

“Finally, it is absolutely wrong and forbidden ‘either to narrow inspiration to certain passages of Holy Scripture, or to admit that the sacred writer has erred’…” – DAS #3

“For as the substantial Word of God became like to men in all things,’except sin,’ so the words of God, expressed in human language, are made like to human speech inn every respect, except error.” – DAS #37

D. Humani Generis, Pope Pius XII, 1950
“For some go so far as to pervert the sense of the Vatican Council’s definition [Vatican Council I] that God is the author of Holy Scripture, and they put forward again the opinion, already often condemned, which asserts that immunity from error extends only to those parts of the Bible that treat of God or of moral and religious matters.” – HG #22

E. Vatican Council II, Dei Verbum, 1965
“Sacred Scripture is the speech of God as it is put down in writing under the breath of the Holy Spirit.” – DV #9
“Since, therefore, all that the…sacred writers affirm should be regarded as affirmed by the Holy Spirit, we must acknowledge that the books of Scripture, firmly, faithfully, and without error, teach that truth which God, for the sake of our salvation, wished to see confided to the sacred Scriptures. Thus ‘all Scripture is inspired by God, and profitable for teaching, for reproof, for correction and for training in righteousness…[2 Tim 3:16]” – DV #11

Demand to know what the Church teaches from the Source, the Church. – John Martignoni

Tips for Reading the Bible

When first reading a book of Scripture, try to read several chapters at a time to get the “big picture”, and then, after finishing the book, go back and study the chapters one at a time.

At the very front of the book, Genesis 2:24, we see the Sacrament of Matrimony: “…and they become one flesh.” At the end of the book, Revelation, chapters 19 and 21, we read of the wedding feast of the Lamb. The Bible, beginning and end and all in between is about marriage of the Lamb to His Bride, the Church…to us. Read the Bible as a letter from your Divine Spouse. Pray to Him for guidance.

This deposit of faith our Divine Redeemer has given for authentic interpretation not to each of the faithful, not even to theologians, but only to the Teaching Authority of the Church. – Pope Pius XII, Humani Generis, #21

This entry is filed under Talks. You can follow any responses to this entry through the RSS 2.0 feed. You can leave a response, or trackback from your own site.
Your Thoughts Are Welcome | Leave a Reply
Prev/Next Posts
« Bringing Heaven To Earth | Home | Story : The Nail »
Subscribe For Free
Pages
Top Devotional Songs
Today's Top 10
Most Discussed Posts