Book : For A Worldwide Eucharistic Revolution 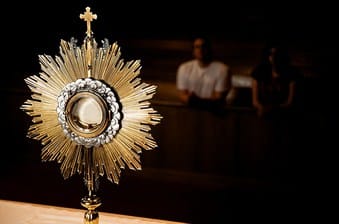 Read the book review of For A Worldwide Eucharistic Revolution written by Liam.The review is by Patrick Hunter and to those who read it, may our eucharistic Creator feed them mystically.

This to be welcomed publication contains articles, prayers, meditations, and poems relating to the objective as expressed in the title of the book. A publication whose contents emphasises constantly that the Creator of all – our Eternal God – is the Eucharist! Not just some material that God fits into.

Throughout its contents this truth in a sense is the be all and the end all underlying the publication. A reality which the author emphasises is the only cure for the problems experienced by humanity at present and forthcoming. For as human society experiences the disease of secularism and its dead-end roads of agnosticism and atheism, mankind is set to encounter a satanic onslaught which it has never experienced before.

In fact it has begun already as confirmed by the constant attacks via the media against Our Lord’s Body, that is the Catholic Church. Also the scandals relating to Priests and children confirms the truth of the La Salette predictions that by the third millennium some Priests and religious by their behaviour would crucify Our Lord over.

The author however elsewhere condemning such behaviour requested that because of the constant attack of satan anything is possible. Referring to the fact that two of Jesus’s chosen twelve Peter and Judas denied and betrayed him. Persons who had witnessed happenings that confirmed Jesus was the promised Messiah.

This publication priced at six pounds and 99 pence sterling is a call to mankind to accept the truth and to ensure that the love of our Eucharistic God via his creation will ensure peace and prosperity for humanity prior to the eventual entrance into eternity.

The author resides in Derry City although born in Limavady, Co. Derry, in the north of Ireland. A leading figure in the Irish civil rights campaign and republicanism he admits being for years a communist and an atheist until his return to the Church in latter years.

Copies can-be obtained from PublishNation, 3 Grenville Court, Lymer Avenue, London SE19 1LR. Copies can also be ordered via the internet from Amazon Books. It is also available on the American Lulu internet site.

This entry is filed under Books. You can follow any responses to this entry through the RSS 2.0 feed. You can leave a response, or trackback from your own site.
3 Responses to “Book : For A Worldwide Eucharistic Revolution”
1

Really it is good to all mankind.

TO OUR MOTHER OF MYSTICISM.
~~~
Oh Mystical Rose,the Immaculate Mother
Of Our Saviour and of us all,we love You
And we thank You for all that You have
Done for our kind, arising from Your “Yes”
To Our Father via His Archangel Gabriel.
~
And based upon the latter may we request
In this age of secularism and atheism Your
Help to refresh the spirit of mysticism within
The Body of Your Son and Our Saviour,
Jesus. An objective necessarily required by
That built upon the Rock that is St.Peter.
Arising from a satanic age of gay nonsense,
Child sexual abuse and the murder of a child
Prior to its God ordained birth.
~
A requirement- a refreshment of the mystical
Spirit in order to counteract the father of lies
Who has even influenced some of the clergy
And the religious of today as was Eve, Adam,
And Judas prior to Your Son’s act of salvation.