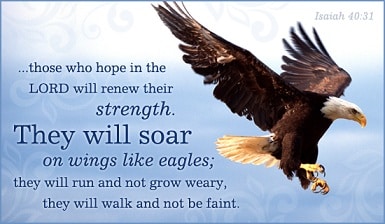 “who satisfies your desires with good things so that your youth is renewed like the eagle’s.” [Psalm 103:5] — Eagles become stronger, bolder, their eyes sharper, younger and soar higher as they grow older. So feel young and strong as days go by. We have a good life for scores +10.

“With your help I can advance against a troop; with my God I can scale a wall.” [Psalm 18:29] — When mighty winds blow Eagle uses its power to scale greater heights. Use the tribulations to soar higher and see God.

“So I say, let the Holy Spirit guide your lives..But when you are directed by the Spirit, you are not under obligation” [Galatians 5:16-18] — Eagles never attack their enemy (snake) or prey on the land, rather they take off to the sky and tear them to pieces. Fight your war in the SPIRITUAL REALM…the battle belongs to the LORD.

“but those who hope in the Lord will renew their strength. They will soar on wings like eagles; they will run and not grow weary, they will walk and not be faint.” [Isaiah 40:31] — In all these put all your Hope in the Lord and Lord alone. In Christ alone my Hope is found; he is my light, my strength, my song.

Listen to the Don Moen song Lead Me Through The Night

Premarital Sex Is A Sin 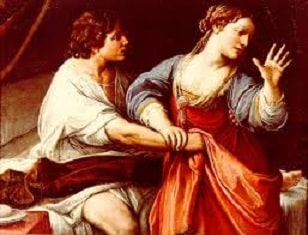 “If anyone destroys God’s temple, God will destroy that person; for God’s temple is sacred, and you together are that temple.” [1 Corinthians 3:17]