Please listen to these new tamil christian mp3 songs from 2013. Click on the play button under each song to play the song online.

You can just click on the play buttons under each of the song titles to play and hear the song online from this web page. We will be posting more new Tamil christian devotional songs in this website soon. Stay tuned. God bless you all.

Sufferings Are For Our Purification, A Preconditioning

St. Alphonsa was one who endured sufferings and made it a festival of joy within the cloisters of a convent. Padre Pio, the poor friar had only the pains of stigmata and harsh life of scorns and ridicule. They enjoyed the season of happiness passing through the narrow way of dryness. Those who stone from a hidden place; attack and false judgments on our personality even from those whom we have never seen at all; the helplessness of the one who is on verdict at the crossroads… Are these all the moments you make me purify, dear Lord?

“Accept whatever befalls you, and in times of humiliation be patient. For gold is tested in the fire, and those found acceptable, in the furnace of humiliation” (Sirach 2:4-5). Dear friends, suffering is a state before our purification; it is like a ‘pre-conditioning.’

Saul’s life was one of arrogance and pride. Rest of Paul’s life was of realization and return. God comes in search of him on his journey to Damascus. There is a lightning in the desert. Saul’s external eyes are forcefully closed; and the internal ones open.

He did not speak a word. A little while later, He opened his eyes, looked at the angry crowd and said; “Let anyone among you who is without sin be the first to throw a stone at her” (Jn. 8:7). Woman closed her eyes and waited for her death. Yes, this public judgment is the unbearable suffering. Stones fall aside… not on her but to the bare ground. What remains is the big pile of stones, beside the woman and Christ; His consoling words. Just a loving correction not to sin anymore…

A dinner at Simon’s house; a woman of bad reputation is in the picture. For her too, his words were similar, ‘your sins are forgiven.’ Music is hidden in the holes of a flute. Pearls are the result of an age-old pain from the part of sea shells.

Job was a just man in front of God; among the few ones in the Bible whom God called ‘just.’ His life was very transparent. God was even surer than Job that he will stay with the Lord, in any amount of suffering. Job is a challenge in front of Satan; one who comes to the play ground from the side of God. If Job is defeated, God is defeated. Job’s victory will be God’s victory. We read in the book of Job; Job took a potsherd with which to scrape himself, and sat among the ashes. Then his wife said to him, “Do you still persist in your integrity? Curse God, and die.” But he said to her, “You speak as any foolish woman would speak. Shall we receive the good at the hand of God, and not receive the bad?” St. Paul is of the opinion that sufferings make us perfect.

“It was fitting that God, for whom and through whom all things exist, in bringing many children to glory, should make the pioneer of their salvation perfect through sufferings. For the one who sanctifies and those who are sanctified all have one Father.” (Heb. 2:10).

God, sometimes for us is like a blanket which we search for only in the heavy summer of perils and conveniently forget in our good days. Oh… God, we ask you sorry.

A good Friday before Easter is not a possibility, but a sure reality and necessity. Good Fridays of suffering are the conditions for resurrection in holiness. Suffering is a process of cleansing from both exterior and interior malice – Just like fasting takes away unwanted fat from our bodies. The unwanted waste is burned in the fire of suffering. “I will turn my hand against you; I will smelt away your dross as with lye and remove all your alloy” (Is.1:25). How fruitful is obedient suffering! It would be one of the reasons why fasting and penance opens us to the fullness of virtues.

The Word of God testifies that suffering is an awareness program; God’s plan to strengthen me. Suffering teaches us how to fly alone. Mother bird after taking the small ones on her shoulder leaves them in between. Later on their way down she takes them again. But the small bird may not know the purpose of this trial on its fall.

It is very vividly given in the book of Deuteronomy in a poetic language; “He sustained him in a desert land, in a howling wilderness waste; he shielded him, cared for him, guarded him as the apple of his eye. As an eagle stirs up its nest, and hovers over its young; as it spreads its wings, takes them up, and bears them aloft on its pinions” (Deut. 32:10-13).

God Is With You – The Everlasting Relief Provider 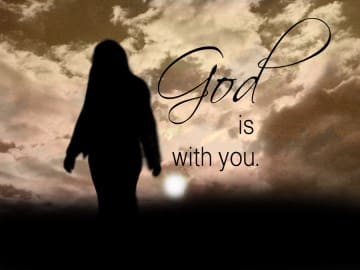 “God always has something for you – A key for every problem: A relief for every sorrow: A plan for every tomorrow”

When I read the above mentioned quotes, I felt some relief and happiness in my mind. In our daily life, we are facing so many problems in our professional life or family life or social life. Whatever may be the problem, it will create negative feeling in our thoughts. Human beings are emotional in nature. So we cannot separate emotions from people.

When problems are beyond the controlling limit of a man, he/she may feel loneliness or depression or sorrow. At that moment, nothing in this world can provide you the ultimate relief. Only the spiritual power our loving God is with you, the everlasting relief provider. If God is for us, who can be against us?

One day, one of my colleagues told me “You know, I am working in a good company, deal with problematic issues daily along with good salary and other benefits. In the midst of all this, lot of tension prevails and i have no peace of mind”. I am sure, most of us are experiencing a similar situation. How can we overcome this situation?

Certain people may find the solution through drinking alcohol or enjoying life in the most sinful manner. It will provide you happiness, but that happiness won’t last throughout your life. Because, God is with us every moment even when you are doing a sinful act. You may get bail or relief from jail or others, but the ultimate relief provider is counting your acts. How can you prove yourself before our loving God?

Now, one question may arise in our mind: From where can we find the everlasting relief or happiness or peace? “Happy are those whose lives are faultless, who live according to the law of the Lord. Happy are those who follow His commands, who obey him with all their heart. They never do wrong; they walk in the LORD’S ways” (PSALMS 119:1-3)

So we should pray to our Loving God “You are all I want, O Lord; I promise to obey your laws. I ask you with all my heart to have mercy on me, as you have promised”. Believe in Almighty, He can cure our mind; He has a plan for us; He is the one and only relief provider for our sorrow. Amen.